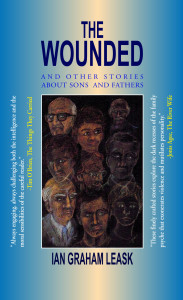 The Wounded & Other Stories About Sons and Fathers

A British writer's first collection of stories, set in a newly independent India, contemporary England, and the American South. In the title story, told from a mother's point of view, a teenaged son has been taken over with alcoholic binges; he vomits; he loses all cognizance of himself. As we learn more of the father, we find that he, too, is an alcoholic, a chain-smoker, and not far from death. The piece ends on a note of misogyny and violent helplessness, as if to imply like father, like son. Alcoholism, violence, class and racial prejudice figure throughout these stories, which are often garish and melodramatic, like the tale of a Britisher gone completely to seed in India (``Bombay Morning''). Leask makes it clear that he's brought his woes upon himself. The same self-destructive impulse grows a bit maudlin in ``Smoking Section,'' about a man who can't pay his bill at a sleazy diner. But in ``Daddy's Eyes'' and the fine ``Piggybank,'' Leask offers a more reflective view: in the first, an overworked, unhappily married father, whose own childhood was miserable, manages nonetheless to enter his small son's world with empathy and love; in the second, a young boy views his repulsive family's bankruptcy and abusive ways with the determination to do better. The question in many of these stories may be whether alcohol has led to unpleasant behavior, or whether these are unpleasant people who become even more unpleasant when they drink. Accomplished, but to trade upon some mythic eternal wound among men seems facile. The women here are no better. -- Copyright ©1992, Kirkus Associates, LP. All rights reserved.

Originally from London, Ian Graham Leask lives in Minneapolis, where he works as a literary consultant and writing coach. He crafted The Wounded partly from a desire to experiment with various forms of fictional autobiography and partly to understand his own process in developing strong verisimilitude through varying points of view. While the subtitle implies a book about men it is as much meant for women who might want to read more about the debilitating fissures, seldom revealed, which sometimes distort the lives of their men. Ian is also the producer and co-host of KFAI's popular literary show, "Write On! Radio." He can be found on Facebook and at