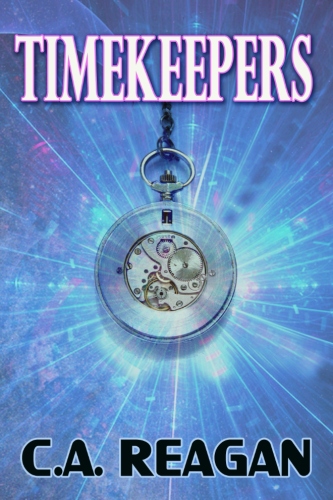 Timekeepers is the first book in the Timekeepers Trilogy, based on a fictional family in Texas who struggle to keep their family safe from a group of aliens - who for many years were thought to be family friends. These aliens have been on earth for some time, explorers stranded after their home world was destroyed. It was out of necessity they came, not to conquer or destroy. That necessity and the background of peace and technology enjoyed by the population of their planet caused the crew to seek out ways to help earth live in peace. Once they realize the people of earth have not developed the ability to live in peace, the commander of the exploration ship changes the mission, and becomes convinced he can utilize the special talents of Walt and Sarah Thompson's children, along with the advanced alien technology, to change time and bring their destroyed home world back into existence. For his plan to work he must kidnap the children, get rid of their parents and Dawson Enright the children's uncle, an operative of the CIA. The fight to keep the children safe takes Walt, Sarah and Dawson across Texas, New Mexico and a large part of the Milky Way galaxy as they desperately seek to take control of the alien spacecraft with their kidnapped children aboard.

C.A. Reagan spent many years working in the oil industry travelling the US and several foreign countries selling drilling equipment. Born in a small town in West Texas he spent countless hours in his youth reading such authors as Isaac Asimov, Robert Heinlein, and Ray Bradbury. In later years when time would allow, reading books by many of the fine authors of the day planted the idea of writing in his mind. After retirement what started as a hobby quickly became a passion Beginning his work in oil industry during the early 70's, he is now retired, living in Texas with his wife Cheryl. With their family raised the couple now have a dream of sailing the world together.