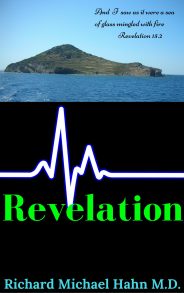 "Revelation" is a high tech medical mystery set in a University Medical Center. James Drakefield, a young, recently divorced, doctor in training, injects his critically ill patient and spiritual mentor, Greek immigrant Peter Pappas, with a toxic medication in an act of mercy killing. When chief pathologist, Gil Wheaton discovers clinical and autopsy evidence of the final event, suspicion falls directly on Drakefield. Medical Center president, Jack Armstrong, intends to avoid scandal by keeping the allegations quiet against the wishes of his security chief, Frank Cappaletti and medical staff president, Harry Griley who is being blackmailed by the prolife activist Reverend William Jefferson Curry for his involvement in a black market adoption scheme. Drakefield, his relationship with the beautiful Sally Quinn in jeopardy, medical license suspended, denounced by the medical staff, and facing trial has to come to his own revelation.

Richard M. Hahn MD has been practicing medicine for thirty one years specializing in Internal Medicine and Geriatrics. Doctor Hahn is the medical director of the Southmont rehabilitation and nursing facility and Southminster Place assisted living in Washington PA. He cares for more than a dozen centenarians and looks forward adding more to that list every year.