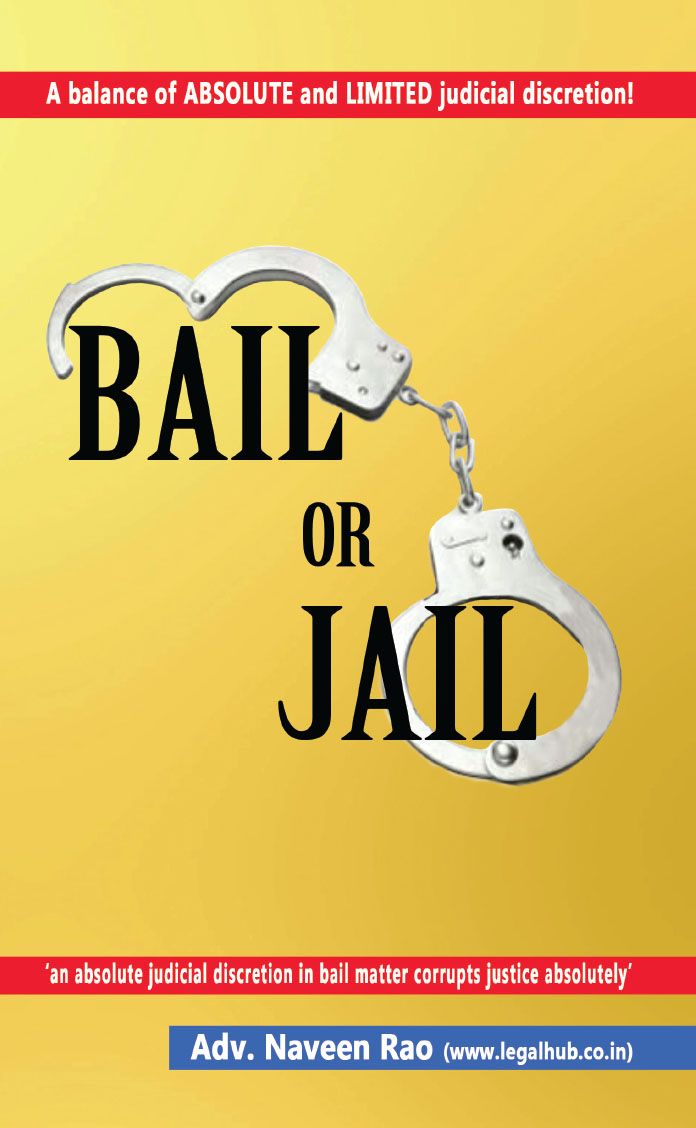 Bail or Jail: A Balance of Absolute and Limited Judicial Discretion

This book on BAIL OR JAIL setting forth a flash-light of critical thinking for every Magistrate, Judge and Lawyer who should be fully equipped with knowledge of Bail Proceedings and its relevant Stages since, Ignorance of above circumstances can cause Miscarriage of Justice.It is not the purpose of the Criminal Law to confine a person accused of an alleged offence before his conviction instead off it is intended to combine the administration of justice with the liberty and convenience of the person accused.To free on conditions of Bail rather to confine in Jail is a jurisprudential jurisdiction which has been evolved in view of the fact that Administration of Justice on the spot or immediately just after the commission of the alleged offence in accordance with the rudimentary principles of an advanced Legal System in not feasible. The question, whether the alleged accused should be kept in prison or should be kept free till pending of trial, therefore, through such Application of Bail before the Court calls for assistance of Magistrates and Judges for consideration on merit in view of impending and prevailing circumstances protecting the Fundamental and Constitutional Rights of the individual accused of and uphold belief and peace in the Society where Courts also act as ultimate Guardian of their Fundamental and Constitutional Rights.It is an inability of existing judicial machinery to try accused expeditiously. "Therefore, accused cannot be detained in Judicial Custody for a long time by refusal to grant Bail" Bail is Rule of Law not the Jail. Bail is allowed to prevent the punishment of innocent persons, and to enable an accused person to prepare his defence to the charge against him. "The principle underlying release on Bail is that an accused person is presumed in law to be innocent till his guilt is proved and such presumably innocent person, he is entitled to freedom and every opportunity to look after his case, provided his attendance is secured by proper security."

Adv. Naveen Rao is an experienced Professional and Master of Laws having interest exclusively in Criminal Jurisprudence and Constitutional Laws representing his Clients in various Courts (from a SDM/Tehsil/Collectorate Court to various High Courts) and Supreme Court of India who is also professionally educated in Medicine/Pharma (B.Pharma). Adv. Naveen Rao setting forth a flash-light on constitutional rights and new empirical research to show as to how we can Reform Bail Laws in India. Tracing the history of bail, he demonstrates how it has become an oppressive tool of the courts that disadvantages minority and poor defendants facing trial and shows how we can reform bail to alleviate problem of mass incarceration. By implementing these reforms, he argues, we can restore constitutional rights and release more defendants facing trial, while lowering crime rates by way of relaxing ABSOLUTE POWER into a LIMITED POWER of DISCRETION which could only be exercised ABSOLUTELY in Grave and Heinous offences rather in the name of Ordinary and Serious Offences paving a way to a balanced justice for all sections of offences with respect to an offender.Bail is never denied for the purpose of punishing a person accused of offence.Bail statutes are remedial rather punitive and should be given a liberal construction to accomplish their purpose.Bail is very basic remedy to any system of law.It is the theory or the policy of the statutes generally to encourage the granting of Bail in proper cases.Bail will ordinarily be granted unless enlargement of accused will be a menace to the public security."When an accused is not given concession of Bail then such detention in nonbailable offences is liable to be detained in custody during the pendency of trial unless he is enlarged on Bail in accordance with law and such detention cannot be questioned as being violative of Article 21 since the same is authorized by law". In this book various relevant and up to date decisions of Supreme Court and various High Court have been incorporated."ABSOLUTE JUDICIAL DISCRETION CAN NEITHER ALTER NOR OVERRIDE THE DICTATES OF THE HON'BLE SUPREME COURT DIRECTIONS AND GUIDELINES."I have done my best to prepare this book but very cordially invite suggestions from my readers for further improving this book and it is fervently hoped, this book would serve to the entire satisfaction of concerned The Bar (Advocates) and The Bench (Judges) who play an important role in the administration of justice and all other esteemed readers of legal fraternity.